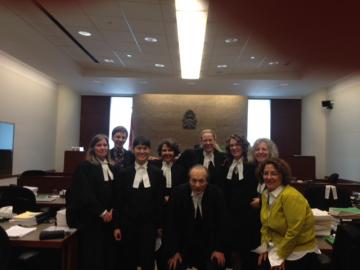 Canadian Doctors for Refugee Care (CDRC), the Canadian Association of Refugee Lawyers (CARL), and Justice for Children and Youth (JFCY) welcome the Federal Court judgment released today in CDRC CARL, JFCY, Rodrigues and Ayubi v. Canada.  The decision declares the federal government cuts to the Interim Federal Health Program (IFHP) unlawful and unconstitutional.  The cuts are not merely wrong, they constitute cruel and unusual treatment, and outrage standards of decency and shock the conscience of Canadians.

The IFHP has been in existence since 1957 and is administered by Citizenship and Immigration Canada.  The program previously paid for basic health care for refugee claimants until they left Canada or became eligible for provincial health care.  Without notice or consultation, the federal government abolished the program in June 2012, and replaced it with a program that denies basic, emergency, and life-saving medical care to thousands of refugee claimants who have lawfully sought Canada’s protection.  Even where provinces such as Ontario have attempted to fill the gap, the federal government persists in obstructing their efforts. CDRC, CARL, and JFCY, together with two individual patients who were severely impacted by the cuts, challenged the legality of the IFHP cuts before the Federal Court of Canada.

“With today’s decision, the Federal Court has recognized that the government’s cuts to refugee health care violate the fundamental rights enshrined in the Charter of Rights and Freedoms, without any lawful justification”, said Lorne Waldman, president of CARL and lead counsel on the case.  “This decision gives life to Canada’s commitment to protect refugee rights.  It sends a clear message to government that it cannot abdicate its responsibility to meet the most basic health care needs of vulnerable refugees and refugee claimants”.

“The impact of the federal Conservative Government’s cuts has been devastating,” said Dr. Philip Berger, a founding member of CDRC and Medical Director, Inner City Health Program at St. Michael’s Hospital.  “For more than two years now, doctors across Canada have seen these cuts place the pregnancies of refugee women at serious risk, cause denial of treatment for sick children, and deprive refugees with cancer of coverage for chemotherapy. We are pleased to see the Federal Court put an end to this unwarranted suffering.”

“We applaud the court for recognizing and upholding Canada's commitment to the lives and health of children in our communities; and as a signatory to the UN Convention on the Rights of the Child, the Court has recognized the need to protect and provide for the specialized needs of some of the most vulnerable children in Canada”, added Emily Chan, counsel for JFCY.

The Federal Court ruled that the executive intentionally targeted poor and vulnerable refugees and refugee claimants “for the express purpose of inflicting predictable and preventable physical and psychological suffering on many of those seeking the protection of Canada (para. 587).  Noting that the “cruelty of the 2012 changes to the IFHP is not limited to children” (para. 670),  the judge nevertheless specifically highlighted the impact of the cuts on children, noting that the government’s actions “potentially jeopardize the health, and indeed the very lives, of these innocent and vulnerable children in a manner that shocks the conscience and outrages our standards of decency   They violate section 12 of the Charter” (para. 1080). The Court also emphasized that there is “no reliable evidence before this court” that the cuts to the IFHP would result in predicted cost savings to the federal government. To the contrary, there was evidence that some of the cost of medical services previously covered under the IFHP “has now simply been downloaded to the provinces” (para. 1012).

“This decision is a victory for human rights, for human dignity, and for compassion”, said Audrey Macklin, Professor and Chair in Human Rights Law at the University of Toronto, and executive member of CARL.  “The decision makes clear that a government cannot deliberately subject human beings to physical and emotional suffering as a means of punishing them for seeking refugee protection. Asking for refugee protection is not a crime. Today’s judgment is consistent with the Charter of Rights and Freedoms, Canada’s international legal commitments, and the values that make us proud to be Canadian.”

Justice for Children and Youth

CARL is a non-profit organization. To ensure our independence, we do not accept government funding, nor are we a registered charity. We rely on personal donations to make our work possible.

Interested in joining in our work? Become a CARL Member!

Copyright © 2020, The Canadian Association of Refugee Lawyers. Designed by Devsaran.