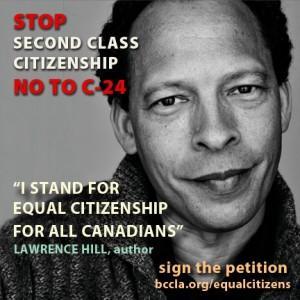 VANCOUVER  (June 3, 2014) – The BC Civil Liberties Association and the Canadian Association of Refugee Lawyers delivered their petition of over 25 000 names to a Citizenship and Immigration office in Vancouver this morning. The petition asks the Citizenship Minister to not pass Bill C-24, legislation that introduces sweeping changes to Canada’s citizenship laws, including creating second-class Canadians with fewer rights. In addition, 60 legal and academic experts in citizenship and immigration have also issued an open letter asking the government to revise the bill, calling it a “serious threat to the rights of all Canadians.”

The new law will increase barriers to obtaining citizenship and take away rights from countless Canadians holding dual citizenship. By increasing application costs, language testing requirements, and the length of residency required, the law will make citizenship more difficult to obtain, particularly for vulnerable permanent residents, grandparents, and low-income immigrants. The proposed changes would allow, under certain circumstances, for dual citizens to be stripped of their Canadian citizenship – sometimes without even the benefit of an in-person hearing before an independent judge.”

“This new law will turn Canadian citizenship law upside down, and shatter the core principles of Canadian citizenship – that all Canadians have equal rights, and that Canadian citizenship is permanent,” said Josh Paterson, Executive Director of the BC Civil Liberties of Association.  “Even though this new law is being rushed through the House of Commons with very little debate, over 25 000 people have demanded that the Citizenship Minister not go forward with these changes.”

The groups added that the law will divide Canadians into two classes of citizens: “first class” Canadians who hold no other citizenship, whose citizenship is protected forever; and “second class” Canadians – dual citizens – who can have their right to live in Canada taken away from them by the federal government if they are convicted of certain serious crimes.  Those born in Canada are also at risk of losing their citizenship under the proposed law, if they are dual citizens with another country or are even entitled to obtain another citizenship because of their family origin. “Anyone who takes the time to read this law can see that it will take us down a very dangerous road,” said Paterson. “It divides Canadians up, saying that some belong here less than others.”

“If a Canadian commits a crime, he or she is punished according to the law – they are not exiled to another country,” said University of Toronto Law Professor Audrey Macklin, speaking as an executive member of the Canadian Association of Refugee Lawyers. “Exile is a medieval punishment that does not belong in a modern legal system. The new law is also arbitrary. If I commit a crime, and am solely a citizen of Canada, I am safe.  If you commit the same crime and you are a potential citizen of another country, maybe because your parents or grandparents are citizens, the Canadian government could try to banish you there even if you’ve never set foot there. That is fundamentally wrong.”

Bill C-24 passed second reading in the House of Commons last week and is expected to pass third reading later this week.

Read the open letter from 60 legal and academic experts in citizenship and immigration here.

CARL is a non-profit organization. To ensure our independence, we do not accept government funding, nor are we a registered charity. We rely on personal donations to make our work possible.

Interested in joining in our work? Become a CARL Member!

Copyright © 2020, The Canadian Association of Refugee Lawyers. Designed by Devsaran.